So many of my articles begin with “as a psychotherapist in private practice…”, and what I meant by that was “at my office in West Hollywood, California”, where I made my home-away-from-home for the past 9 years. I think I spent more time in that room than in any other room in the course of the week (including my bedroom, but “Confessions of a Workaholic” will have to be another article).  It wasn’t the perfect building; I got complaints from clients fairly frequently about the outdated and dingy state of the men’s room on a regular basis, until just after this past Thanksgiving they were completely renovated.  Then there was the day I was with a client (an incredibly gifted young singer whom I’m convinced will go far) when I heard shouts from my office partner outside in the waiting room.  I thought he was being attacked.  I interrupted the session and looked outside, and the little sink in the supply closet off the waiting room was backing up and black, stinky sewage water was spilling over onto the waiting room carpet in a 10-foot diameter.  Needless to say, Gifted Young Singer and I finished the session outside and I canceled the rest of the client day to go shop for new carpet, which was installed the next day and problem solved.

Then there were the drunk homeless people who would occasionally use our building’s unattended lobby to try to sleep it off, and when we had them leave there, they would set up camp deep underneath the building in the dark corners of the underground carport.  Oh, and we only had one parking space, so I often had to park a couple of blocks away, and despite the lovely stroll, was sometimes a real pain.

But I liked it anyway.  Fresh orchids and a fabulous desk from Mortise & Tenon in my office itself made up for a lot.  Then there was the tradition of getting my coffee from the charming woman, Lipy, from Bangladesh, at the Mobil mini-mart next door.  We even exchanged Christmas gifts.  And the African-American lady at the beauty supply place next door who had run her business for over 30 years and gave me plenty of support during the lean times in the Recession.  And I haven’t even mentioned the harem of my erstwhile boyfriends who were all the waiters at Basix Café, where this creature of habit ate lunch more often than not (also giving them gift cards at Christmas time, with personalized cards – like I said, I was there a LOT). And the building’s lobby was always in need of something, and I was prone to cleaning it up myself just to make the best possible impression on my clients as they arrived.  I became a master of the two-minute conversation with my office mate, between clients.  We got through a lot of kvetching about life in those little talks, thousands of them over the years, all abruptly ended when one of our clients arrived and it was back to business.

Abruptly ended.  Yeah, you could say that.  In the wee hours of this past Tuesday morning, that building burned down.  An eyewitness allegedly saw two men break an exterior window at the office down the hall, throw something in, and flames erupted.  I was awakened Tuesday morning with my phone “blowing up” (so to speak) by my office mate and a fellow therapist who rented space at my office on the weekends, telling me about the fire.  I got dressed carefully, like I was going to a wake, and went over to find the smoky, black edifice that was once my home-away-from-home.  It was immediately apparent that we would have to find new office space.

I learned shortly after that much of my belongings were OK, by looking out a window from the neighboring Pilates studio in the directly adjacent building, but the building was off-limits.  I was relieved to see that, but panicked that I couldn’t get in to retrieve confidential client files, even if they were locked up.  The firefighters had kicked in all the interior doors to make sure no one was trapped inside anywhere.

A saint of a friend and colleague offered to rent me temporary space by the hour in Beverly Hills, and I saw my evening clients that night without a hitch.  I stayed there all week, eventually finding new space through another kind colleague who gave me a lead on open space in his building.

People keep telling me, “I can’t imagine.  How are you doing?”

I didn’t have time to tell them the details, but I’ll tell you.  How am I doing?  Well, just like my reaction to the 1994 Northridge earthquake, and certainly 9/11, I learned anew that just because you’re a therapist doesn’t mean you aren’t prone to trauma symptoms just like everyone else.  But, since I really like to “walk my talk” in what I help clients with, both for ethical reasons and for “street cred”, I did exactly what I would tell a client to do, to dig deep within you and find the resilience we need to face life’s challenges; “When the going gets tough, the tough get going.”

On Tuesday, I realize now that I was one big bundle of psychological defenses (mostly denial) and running on automatic pilot.  After the reality set in, I began to feel sad about the losses of the relationships I’d built with my local neighbors that I realized can’t be sustained if I’m not walking in the neighborhood a few times a day, every day, anymore.  But, as one of my idols, Louise Hay, would recommend, I tried to list all the things I was grateful for:  the relationships, the comfort of the routine for all those years, the familiarity that gave life structure when things went  haywire (such as making those walking errands with a cane, slowly, when I had each hip replaced), and of course the opportunity to be of service to the gay male community who came to that little room to “process” and overcome many of life’s challenges.

I was reminded of another of my idols, Jack Canfield (author of The Success Principles) and his adage, “Event + Response = Outcome”.   I kept asking, “What is the best response to this?  How can I take a positive approach to this?”  I learned, from seeing other potential office space, what works and what doesn’t when it comes to commercial space.  I learned how others made their “home away from home”.  I learned that parking is tough in much of the westside.  I learned that some people want to sell you a sow’s ear and tell you it’s a silk purse.

I also learned who my friends were, and I have many.  The hospitality of my colleagues at the temporary space was touching.  I asked for help to find new space, and a seeming army of friends and colleagues gave tips.  To receive help and support from people, some of whom I didn’t even know, and many of whom could be considered “competitors”, was very moving.  It reiterated what we all already know:  we only go around once in this life, and what matters ultimately is sharing and supporting one another to get by as best we can.  I would add that most, not all, of the kind friends and colleagues were gay men.  I always want to point things like that out when the Religious Right is meanwhile, just this week, currently passing laws based in hate against gay people in Kansas, Arizona, Russia, Nigeria, Uganda, and sadly, too many others for me to try to enumerate off the top of my head.  Gay men, people, gay men – they were the ones who helped their fellow human being in at time of need.  And in abundance.

I readily admit that I have “more than a tablespoon” of OCD in me.  I handle it, but it’s been there a long time and it’s not necessarily going away.  So change is hard for me.  Just ask the waiters at Basix who knew by heart the same three or four menu items I kept going back to over and over.  I drank enough iced tea there to sink a ship.  Just ask Lipy about how I combined the coffee and the hot chocolate to make mocha, hundreds of times, on a quick errand between my afternoon and evening clients.  So moving to a new space, however nice I can make it, is a difficult change.  It is yet to be determined what kind of comforting routines I’ll settle into there, but I know I will.

What’s my advice on this?  It came to me on Wednesday morning.  My grandfather, who lived to be 93 and sat on a piano bench next to George Gershwin, chatted in the Oval Office alone with President Truman, and sailed around the world three times by the time he was 25, gave me advice almost literally from his deathbed: “Roll with the punches.”

Right about now, I’d like to roll my fist across the face of the arsonist who caused all this trouble, but I’ll let law enforcement handle that.  I’ll salvage whatever I can from the old office and move into the new one in the next few days.  I’ll get a new couch, and it will be back to the business of making people wear smaller hats (“head-shrink” joke).  Life, and therapy, will go on.

Forever one to go in for show tunes, “Kiss Today Goodbye” (from “A Chorus Line,” for those of you I’d like to spank for not knowing that) is playing on my stereo as I write this, and it seems appropriate.  “And point me toward tomorrow…”

But I gotta tell ya:  I’m going to miss the boys at Basix. 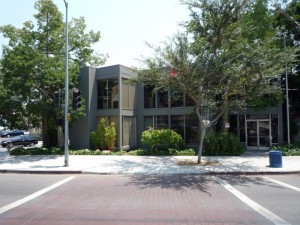