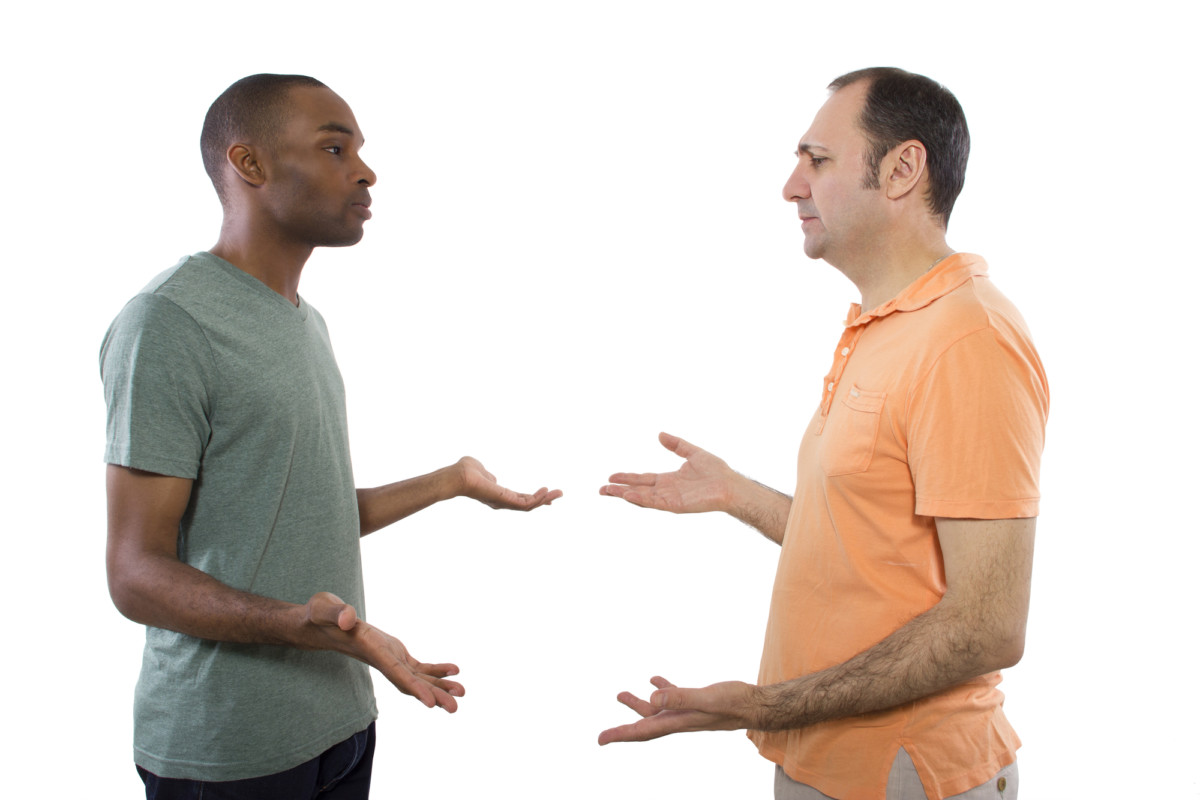 One of the most common themes I hear in my psychotherapy practice in Los Angeles (specializing in therapy and coaching for gay men, and gay male couples, for over 27 years) is in relationships (Gay Relationship Inequality) where one partner has a complaint that he feels his partner is not “making an equal contribution to the relationship.”  This sense of imbalance or can cause feelings of anger, resentment, or even hopelessness, with the partner feeling burdened and exhausted, and a sense of righteous indignation about the perceived imbalance.

The imbalance can be about a lot of things.  Partner A makes much more money than Partner B (I have another article about that, “Gay Men’s Relationship Issues:  When You and Your Partner’s Incomes Differ Greatly; see the link,  here), and Partner A resents “paying all the bills” for Partner B.  Or maybe Partner A is the one who initiates all the sex, while Partner B “never does”.  Or maybe Partner A does a lot of housekeeping, trying to keep it neat and “presentable” to guests, while Partner B “leaves his crap all over the place.”  Or, Partner A feels that he is the one paying attention to, and feeding the emotional life (and affection) in the relationship, while Partner B takes a passive approach that makes it seem like he’s just not that into it.

This imbalance feeling can come early in the relationship, the middle, or sometimes quite a while (years!) into it.  One of the things that’s challenging is that it can be about perceptions:  Partner A “thinks” he’s the one “doing it all”, when Partner B might disagree that that’s the case at all, and might even think that Partner A is the “lady of leisure” in the house.

Part of the challenge here is that this is about gay male couples trying to work together in a non-heteronormative model.  There are two men here; it isn’t the “normal” (I mean the facetiously) situation of a man and a woman, falling into very predictable but functional gender role stereotypes.  No matter how “modern” they think they are, heterosexual relationships often fall into surprisingly traditional gender roles, such as who mows the lawn, who does the cooking, who does most of the child care or domestic chores, who drives, and who does most of the “breadwinning” in the business world.  And these heterosexual couples fall into these gender-role patterns because both partners probably observed their respective sets of parents in their Families of Origin doing the same thing, and their behavioral modeling was a very powerful imprint, affecting even their unconscious behavior.

With two gay men, we can’t really adopt the exact same situation our parents modeled for us; the “roles” in the gay couple’s house have to be more consciously determined, even negotiated, as to who does what, without those old gender stereotypes to fall back on in a pinch.  Figuring out who does what often needs the help of a therapist who is experienced in gay men’s cultural competency, to explore how two men can make a happy home together, when each partner might take on a combination of traditionally “feminine” versus “masculine” tasks.  This has been referred to as “alpha” and “beta” roles, and these are usually separate from the top/bottom roles the men might have in the bedroom.  While some homophobic and heterosexist views of gay couples used to lead some to ask, “Which one is the woman?”, in gay couples, the answer is, “Neither!”, challenging the critic’s obsession with trying to overlay heteronormative roles in gay relationships.  Each partner might have a talent, skill, aptitude, interest, or even aversion to different tasks, but in many gay couple’s homes, “somebody” has to do the chores perhaps neither partner wants to, such as tasks that are tedious, menial, or time-consuming.

Historically, heterosexual couples had it easy if – and that’s a big IF – they wanted to.  My mother for a time was, by her own report, very happy being a homemaker/housewife and mother, while my father worked in a government office.  I call this the “Lucy and Ricky Model”, after the 1950’s TV show, “I Love Lucy”, with (the hilarious and business-savvy) Lucille Ball and (Latin hottie and television technology genius) Desi Arnaz.  In that show, Ricky worked at a club as a bandleader and drummer, and Lucy stayed home and kept house, always with a piping-hot dinner ready for Ricky when he came home.  Most “real” people, not on TV, followed their television counterparts.  This became more complicated when Women’s Lib came about, and there was a movement to free women from the burden and gender expectation of being housewives when maybe they wanted to pursue work outside the home and develop a profession, just like their husbands.  In the late Sixties and early Seventies, this was, for many, an “option”; later, after Republican policies have all but destroyed the Middle Class and the post-war (WWII) economy, the need for both spouses to work outside the home became more of a necessity in most American families, especially with rising expectations in standards of living.

So for gay male couples, the balance of contributing to the home by way of a salary from work, versus contributing to the home by way of taking care of more domestic chores such as cooking, cleaning, paying bills, pet care, and so on, is less clear.  When Partner A earns more money than Partner B, Partner A must avoid the pitfall of resenting Partner B for that (see the other article about overcoming an income gap in gay male couples).  But when Partner A complains of an “imbalance”, we have to look at why he’s feeling that.  Often a Partner A will complain of Partner B not working as many hours, regardless of salary, and has much more free time – yet doesn’t do anything with allocating that toward home upkeep. This is when both partners need to discuss “expectations” as such, and have a conversation about what would be fair.  Maybe the extra free time that Partner B has can’t be allocated to cooking or cleaning, because when he’s not working, he’s studying for a school program that will boost his career.  Or he’s practicing something that will lead to better job skills and upward mobility, which is a better use of his time than merely housekeeping.

When the perceived imbalance is not financial, but more emotional, then there’s a need to discuss expectations again, but it’s about what is needed or wanted in terms of affectionate behavior.  Maybe Partner A wants to have more attention from Partner B to discuss something he’s interested in, like a hobby or charitable work.  Maybe Partner A just wants to spend more time sharing enjoyable activities together with Partner B.  Maybe Partner A is not getting his sexual needs met, and wants to negotiate changes in the sexual relationship with Partner B.

In all of these cases, it’s a matter of identifying for Partner A where the imbalance is felt, and letting Partner A feel validated for his needs, first from the therapist, then from discussions with Partner B.  Partner B might not be able to accommodate everything that Partner A is asking for, but at least Partner A’s needs are expressed in conversation, and can be negotiated about desired changes in behavior moving forward.

Of course, as soon as Partner A expresses his needs, Partner B might have an “equal and opposite” list of requests for behavior change he wants to see from Partner A, too.  It’s possible that Partner B also feels a sense of imbalance, this time not in his favor, and needs to express these imbalance feelings to Partner A. I’ve seen this a lot in practice, and both partners might make a very compelling case for their needs.

So, the challenge is having both partners discuss their grievances about the other, without it devolving just into a screaming match and mutual accusations.  It’s about developing productive interpersonal communication skills, which can be improved with the help of the therapist.  Strive to improve not just the frequency of communication with partner about the topics that will make your relationship better, but also the quality of your communication, the ability to talk and listen with greater accuracy of expressing your feelings, while also understanding his. There are couples therapy or relationship coaching techniques that help guys achieve this, such as the “Couples Dialogue” technique by Harville Hendrix.

When you’re talking about achieving equality in the household, or reducing that sense of imbalance that could be making one or both of you angry, ask yourselfand each other some of these questions to get the conversation started:

1.  What level of “cleanliness” do we want to live with in this house?  Do we want to put in the time, money, and effort it takes to look like House Beautiful, or would “Modern Fratboy Style” suffice?

3.  How does the home you want remain similar to what you were used to in your Family of Origin, and how do you want it to be different?  How are any cultural differences in our Families of Origin affecting how we live together now?

4.  Who takes care of paying the bills on time now? Should that continue to be the same person, or change?

5. Who does the majority of meal preparation now?  Should that change any?

6.  Who sees to cleanliness and safety of the home now? Should that change any?

7.  Who does the majority of caring for any pets now? Should that change any?

10.  What money can we decide to spend to make life easier here?  (Hire a maid/cleaning person; hire a professional organizer; hire a personal assistant; hire a dog walker or pet caretaker; hire a decorator; buy some nice-looking storage containers; hire someone to haul away junk; buy some better furniture; buy some better appliances; remodel the paint/carpet/fixtures, etc.).  How can we make contributions for these expenditures fair and proportional to each of our incomes?

Modify these questions as you see fit as to what’s right for your relationship, but you get the idea.  Questions like these during candid conversations with your partner, during time set aside just for this, without distractions, can help get the dialogue and improve the quality of the communication in your relationship.

However, if you find yourself having difficulty with this type of gay relationship inequality dialogue, without it devolving into a screaming match, name-calling, stonewalling, or even violence, then you might need the structure, support, and safe space of having these conversations with help in couples therapy or relationship coaching, both of which are services we offer at GayTherapyLA.  For more information on how we can help you, email Ken@GayTherapyLA.com, or simply call/text 310-339-5778for more information or to book your appointment.