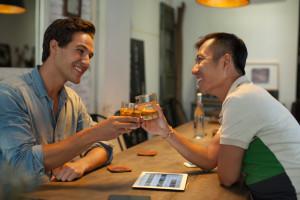 In my private practice in counseling and coaching gay men in West Hollywood, my clients who are single often mention a desire to find a permanent partner.  This is only natural; most people (male/female/gay/straight) have an urge to find a partner/spouse to share life with, but this is by no means everyone – it’s also OK to be single.  But for those who want a partner, the process can be frustrating.  I hear complaints of “where are the good men” and “it seems the best guys are taken.”  This is not necessarily true.  Since I work with gay male couples as well, for over 20 years now, I have come to a few conclusions based on my couples work on what makes a happy relationship – and what doesn’t.  This comes from many years of observation of common problems and challenges in a couple, and what common elements strengthen the relationship and help it endure over time.

To that end, I wanted to share a few observations on what a client mentioned to me as “The Three C’s”.  Now, I use another version of “The Three C’s” in my work with couples – I call them Commitment, Communication and Compromise, and an article on that is here.  I find that most problems in relationships are related to one of these.  But my client was referring to gay men’s dating with a different set of “Three C’s”.  He called them the gay men’s dating pitfalls of emphasizing “Cash, Connections, or C—k” (I’ll abbreviate that last one for a certain “professional decorum”, but you know what word I mean – think of another word for rooster).

Let’s take each of those Three C’s at a time.  The first one – Cash – means that in dating, it is generally a mistake to put your number-one priority on how much money a guy earns.  Sure, even your buddies might joke that they want to find a “rich boyfriend,” and we see lots of examples of this.  However, when we think about what sustains a relationship over time, like sharing common interests, spending free time together, and intimacy, how much money the guy has is often irrelevant.  While it’s true that a relationship with someone who is chronically unemployed by way of bad habits, or isn’t mature enough to support himself, would be undesirable, it’s not necessary that he be a wealthy man to have a happy relationship.  When it comes to cash, make your own by developing your own career.  Cultivate your education, skills, networking, and a body of work that speaks for itself.  Build your own resume.  Create a career that satisfies your ideal vision of your Professional Self (something I help many individual clients do in career coaching sessions).  Have your own personal cash flow and your choice of partner be independent, separate variables.  This will be very self-empowering for you to be able to choose any partner you want, regardless of having to rely on them for your support (which is dangerous for you if the relationship should ever end, leaving you without your own salary history and professional skill set in the aftermath).

The next “C” is about Connections.  Too many gay men choose partners not because of their emotional and sexual attraction, but because of their “connections” to influential people and opportunities – and in Los Angeles, this often means to the entertainment industry, for young Hollywood Hopefuls, but it can also be in other fields.  While I encourage my clients to identify and cultivate relationships with people who can be mentors in your chosen profession, including seeking out “informational interviews” with professionals whom you admire, I believe that your career connections and your choice of a domestic partner for a relationship should also be two independent variables.  Imagine how you would feel if a person was only paying attention to you – especially romantically – for the job you had, or the status/position you held, or the people you knew who could help that person succeed professionally.  You would, naturally, feel resentful and objectified, and want to be validated for yourself as a person, not just what’s written on your business card.  Well, the partners that you seek out would feel the same way.  Keep your mentors and networking contacts separate from the man you love at home.

The last “C” is, well, the big one: “C—k”.  Or maybe it’s not a “big one;” that’s my point.  When you’re choosing your mate for theoretically a lifelong relationship, the “size” of your guy should actually be a fairly minor consideration.  Far too many gay men who are seeking a lifetime of love and companionship (and, yes, sex) limit their social and sexual contacts to men who are particularly well-endowed.  This isn’t everyone – especially tops and even squeamish bottoms – but far too many guys place penis size above all – or at least most – other considerations of a man’s suitability for a relationship.  This is a mistake.  If you do this, then the novelty of his endowment will eventually wear off and you’ll be left with whatever remains.  If the man of your dreams is less endowed than you would like, see if you can compromise on this.  There is also the possibility of using larger toys to satisfy you, or negotiating an open relationship just for the purpose of occasional romps with Mr. Big (one couple I worked with did just that, and their problem was solved).

I’ve always said that a gay man’s relationship must work on four levels:  Emotionally, Physically, Domestically, and a fourth area that I call “Managing The Other” – which includes not letting exes, other gay men, roommates, intrusive parents, neighbors, or bosses undermine the commitment and quality of your relationship.  My article on those four levels is here.  And, yes, sexual satisfaction is part of making it work physically.  But to put an emphasis on size above all other considerations for your potential partner confuses the issue on whether you really want a partner – or just a piece of one.

There are other considerations in gay men’s relationships that need attention.  For example, I also help couples and individuals with the issue of addictions in a relationship – whether it’s alcohol, crystal meth, cocaine, prescription painkillers, or even “just” marijuana.  But if you avoid over-emphasizing the “Three C’s” as discussed above, your quest to find “Mr. Right” may be enhanced.  And if you need additional guidance on how to maximize your chances of finding a suitable mate, consider booking some counseling or coaching sessions.  These can be effective in shortening your search by getting to the heart of what’s preventing it from happening for you now.

To book your appointment, text or call 310-339-5778, or email me at Ken@GayTherapyLA.com.  Sessions are available in my office in Los Angeles/West Hollywood, or via webcam (Facetime, Skype, etc.) or over the phone, to anywhere in the world.