Gay Men Using Apps: The Dilemma of Dating versus Hookups

In my psychotherapy and coaching practice as a long-term (29 years in 2021) specialist in gay men, I’ve noticed in many client sessions lately that single guys (and those in open relationships) are presenting a dilemma about how to use the online apps like Grindr, Scruff, and the others (that compete for the gay male audience and gay male consumer dollar).  Working with single gay men in search of a partner and navigating the dating world (and all of its rewards and challenges) is something I do often; it’s a universal situation with guys in many cities, states, and countries, and it’s a common request that my clients want help with.

Inherent in the situation is that these guys seem to face a dilemma: they are sometimes trying to date, but then complain that the apps tend to be so sexually-focused that you can use the apps to hook up (at times), but less so for dating.  This can lead to a frustration that while a guy’s sexual needs can be met with reasonable (although not perfect) effort, his emotional and relational needs get frustrated.  The apps don’t always align with what their audience really wants.

Let’s take a step back and look at the apps.  These are private, for-profit businesses that represent millions of dollars of global revenue, just like any other business.  Grindr, for example, has been in the news about who owns it, who runs it, and all that, and I have to laugh because who knew, many years ago, that “serious corporate business” would be so interested in the lives of gay men, who used to largely ignored by big business as a negligible market segment.  Now, “marketing to the gays” has become serious business, because Wall Street has learned they can mine the gay male community for consumer-based gold.  Goody for them.

But let’s not forget that what private, for-profit corporations want, and what gay men want as real-live human beings, are not always aligned.  The apps are always going to be designed, very carefully, for what keeps “eyes on the app” in order for their advertising to be seen by as many people as possible, or to recruit or sustain monthly recurring membership fees.  The apps aren’t going to be interested in helping you find a partner and get “married off” and potentially leave the app.  When it comes to helping you find a serious partner, the apps are not your friend.  And I think gay men would do well to keep that in mind.  Be just cynical enough to know what these businesses are motivated by.  Apply your critical thinking skills before you even start to use the apps.

I think it helps to understand that gay men have at least two sets of needs:  the purely physical and sexual, and the emotional/relational.  The dilemma comes in using the apps when we “think” we’re going to get both needs met, but the emotional/relational needs are often frustrated in favor of either actually hooking up, or just “text-dancing” around it (which many of my clients describe as much more likely).  I don’t think the apps are really “hookup apps” as much as they are “sexting apps”.  While all of that can be fun, gay men are left with navigating this constant dilemma of trying to get both needs met.  Men have feelings, too, and we’re not just the sex-crazed fiends that some (misandrist) people try to paint us to be.

Are there “healthy” versus “unhealthy” ways of using the apps?  I don’t like to use such broad labels.  What’s “right” for one person in their approach to app use might not be right for someone else, and perhaps the extreme popularity of the apps worldwide (millions of users over long periods of time) is a testament to the fact that the apps are fulfilling some kind of basic needs for so many types of ages, races, sizes, nationalities, personalities, cultures, etc.  The apps have hit corporate marketing paydirt in that sense.  It’s like selling water or something.

But gay men can fall into a trap of letting the apps dictate the rules, and not the other way around.  Don’t just be what the apps want you to be – their profitable customer.  Use the apps as a tool to approach sex, dating, and even friendship on your own terms.  Remember who the boss is here.  That’s my consistent theme in my practice: self-empowerment (it’s also the name of my 2013 self-help book, Self-Empowerment: Have the Life You Want!).  No matter who I’m working with, again with many different ages, races, shapes, sizes, cultures, nationalities, ethnicities, personalities, etc. of gay man, one consistent theme in our work is that I’m trying to help gay men become more self-empowered to close the gaps between how your life is, versus what you want it to be, in important areas like your mental health, mood, functioning, health, finances, career, relationships, sex life, social life, community, and spirituality (this is also the focus of my upcoming app, GayCoachingLA).

When you take the power, it’s not subjecting yourself to what the apps want you to be (their long-term, consistent, profitable customer), it’s you using the apps as a tool for your own life goals when it comes to sex and dating.

Tips for Using the Gay Apps

So, my advice, based on my work with so many clients over the years who are using apps (and that’s just about everyone), is to take the following steps:

Gay Apps in the Proper Perspective

It seems like it has become some kind of pastime to have a Negative Festival about apps. How they have destroyed the notion of the gay bar.  How they have reduced communication to brain-dead abbreviations.  How they disinhibit guys to be the Online Mean Girls.  How they have made human interaction transactional.  How they are an online meat market, beauty contest, or even slave trade.  I think that leads nowhere, actually.  It’s like guys who are so negative about the gym as being “body Fascism” and all that.  Maybe I’m just Pollyanna, but I like to take a more positive approach.  The apps have made it possible for otherwise very isolated gay men (such as those in rural areas) to connect, whether that leads to being partners/spouses (as many have), or hookups, or dates, or friends, or even just penpals to other cities, states, or countries.  There is plenty to bitch about the apps and we have to use critical thinking to realize that these are not charities or Florence Nightingale; they are just businesses aimed at separating gay men from their money, and all’s fair in the capitalistic commercial marketplace.  But as one of my favorite New Age authors, Louis L. Hay, used to say, with lots of things, “How can I take a positive approach to this?”

Apps are like fast food.  Not exactly a primary source of nourishment, and kind of a commercial, ubiquitous phenomenon, but they have their place.  I think apps are best used when we apply critical thinking, and we don’t expect them to be what they simply cannot be.  It’s a paradox: the more we recognize their considerable limitations, the more we transcend them.  We don’t expect a Big Mac to be haute cuisine or nutritious fare, but if we’re on a road trip and that’s the only practical food for miles around, meh, it will do.

Apps As Part of the Gay Men’s Dating Landscape

I’ve written before about gay men’s dating skills.  I think it’s an ongoing, ever-changing process that is similar to how gay men dated in the past, but each generation has new challenges in dating.  In the past, it was about dealing with anti-gay oppression in the legal system and getting “found out” by peers, bosses, or the police. Today, we have more legal rights overall, but the frustrations of finding a “goodness of fit” with others remains challenging.  So many stars have to align in dating, such as personality, sexuality, culture, socio-economic status or class (I think this phenomenon is drastically overlooked; let’s face it: gay men tend to date within their own peer group of rich, poor, or middle-class, as well as with their peer group in terms of what “class of traditionally hot” they are, but that’s a topic for another time).  The challenge is that we have emotional, sexual, domestic, and interpersonal needs that change over time, even day to day.  Frustrations in dating are a part of single life, which sucks.  But there is also opportunity to meet new guys and have the joy of experiencing unique guys who might be a serious dating partner, or they might just be a mildly amusing chat.  Work to be interested in others, just to see what you can see or learn, including online.  And, work to be interesting – follow your passions and “be you”, because that is very consistently attractive to others.  If you are a horror movie expert and enthusiast, other guys might not share your interest in horror movies, but they will probably find it charming that you are so enthusiastic about them.  When you “light up” about something, you shine, regardless of what you are “lighting up” about.

We’re not going to solve all the problems in gay men’s dating at one time.  It’s a very layered thing.  But if you can think of the apps as just one tool in your Batman utility belt of navigating the Dating World, you can use them to your own leverage of getting your needs met.  Having a good mind-set, cognitively and behaviorally, can help. 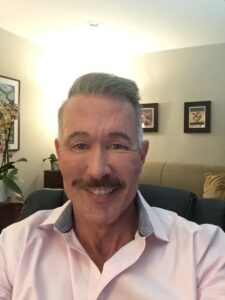 If you need or just want help with how to sharpen up your cognitive and behavioral approach to dating, please consider therapy or coaching.  It’s an ongoing process, and I’m proud of the work that I do supporting gay men to move closer and closer to their goals.  Let me know if that might interest you:  email Ken@GayTherapyLA.com, or call/text 310-339-5778 for more information.  I’d be happy to help.