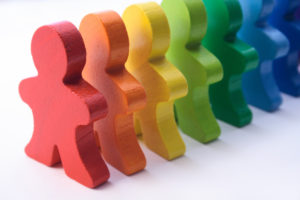 The Gay Men’s Chorus of Los Angeles (of which I was a member for a number of years in the 90’s) sings a song in its permanent repertoire called “Diversity”, singing about how the gay men in the Chorus come from many different states and many different occupations, and our “diversity makes us strong”.  I was thinking of that theme recently, especially in the wake of the Orlando massacre, and the subsequent flurry of news items and essays.  With the current bitter, heated, atomically-divisive election season in the United States right now, one thing (of the many) that frustrates me is that some bigoted Americans really fail to see the beauty in the diversity we find in the American people.  Come to think of it, that whole concept of “diversity” is a good thing, applied to so many considerations.  Here are some to think about, embrace, and celebrate, for how diversity can contribute to your quality of life:

There are probably more examples of how diversity contributes to our overall mental, physical, and even social well-being.  Perhaps diversity in friends?  Climate?  Sexual experiences?  Activity vs. rest?  Can you think of more?  Comment below.

Concepts like embracing diversity work on many levels, from the “macro” – which is society at large – to the “mezzo”, which is small or local groups of people, such as in a state, city, neighborhood, or office/organization, and “micro” – within ourselves.  Whenever we are frustrated, bored, depressed, unfulfilled, or unenthused, it’s entirely possible that what’s missing is a diversity of experience.  If you’re experiencing any of these states, try to “mix it up” from the list above.  Brainstorm something new and different that you can do, or be exposed to.

These kinds of concepts that contribute to overall mental health and well-being are things that are sometimes topics in therapy and coaching.  If you need help with giving your life a “boost”, consider working with a therapist or coach who can help you think or behave in new ways, and create that diversity.  For your free, 15-minute consultation on how the services at GayTherapyLA might help you, email me at Ken@GayTherapyLA.com, or call/text 310-339-5778.  You don’t have to be an LGBT person to work with us, as some members of the GayTherapyLA clinical staff are “straight allies” of the LGBT community and work with straight people as well.  (See?  Even at GayTherapyLA, we value diversity!)