I was diagnosed with HIV on Saturday, November 3, 1990. That was 25 years ago today. This was at the old site of the LA Gay & Lesbian Center, when it was on Highland Avenue. My “code name” that I gave one week before for the blood test was “KH90” (my initials and the year), … Read more

As a psychotherapist who has worked as a specialist in gay men’s and HIV mental health for over 23 years, I have always maintained that HIV/AIDS is more than a medical issue; it’s a psychosocial one as well.  As Chair of the LA County HIV Mental Health Task Force for 9 years, we advocated for … Read more

At GayTherapyLA.com, (which can also be accessed via www.PozTherapist.com, to coincide with my identity as a psychotherapist with over 22 years experience providing gay-affirmative therapy to gay men and couples, as well as my 24 years being HIV-positive, and an HIV mental health expert and advocate in Los Angeles), my staff of clinical associates and … Read more

As a licensed psychotherapist in West Hollywood with over 20 years’ experience specializing in working with gay men and people living with HIV, I’ve helped many guys cope in the early days after receiving a positive HIV test.  Often, my new clients have just been to their doctor’s office, visited the AHF mobile testing van, … Read more

I’ve been less active, overall, since recovering from total hip replacement surgery on my right hip on December 6 (the left one was done in April, 2008, so I kind of know the drill). As I hobble around, walking with the aid of a cane for about the next two months while I undergo physical … Read more

With the news this week that a man has been declared officially “cured” of HIV by way of stem cell therapy (http://www.huffingtonpost.com/2010/12/14/hiv-cure-berlin-patient_n_796521.html), I was heartened, to say the least. Immediately, my mind went to two things: one was about what this means for the immediate future of HIV eradication research, and how soon could something … Read more

Living with HIV:   It was 20 years ago today, November 3rd, 1990, that  I was diagnosed with HIV.  Knowing this “anniversary” was coming up, I was thinking about how to write about it.  I had things in mind, like a bullet-pointed “highlights” of the challenges and even perhaps “rewarding” or at least “poignant” experiences … Read more

In my work as a psychotherapist and life coach, I am always grateful for the many and varied sources of inspiration that come my way.  The latest uplifting piece of material I’ve come across is in music, and in another article, I’ve written about songs that can be inspiring and empowering.  There is a relatively … Read more

My son is 26 years old, and I’m his mother. I live in a suburb of a major American city. My son just told me he is HIV-positive. How do I respond to this? I love my son, and I want him to be happy and healthy, but I’m just now sure “how” to react. Any advice?

Regarding the LA Gay & Lesbian Center’s new “HIV is a Gay Disease – Own It, End It; social marketing and advertising campaign (“HIV Ads Embrace, and Stun, Audience” (Sharon Bernstein, September 30): As a gay man living with HIV since 1990, and since that time working in HIV mental health and social services in various community agencies (including the LA Gay & Lesbian Center), and as currently a psychotherapist in private practice specializing in serving gay men, including many living with HIV, I am deeply offended by this campaign. I find this campaign heinous as much for what it isn’t as for what it is. It is a throwback to the early days of the AIDS crisis when anti-gay forces in this country used AIDS as “justification” to hate and discriminate against the entire gay community, without realizing that AIDS is a disease caused by a virus that can strike anyone –

Read moreFrom the Los Angeles Times – Letters to the Editor: 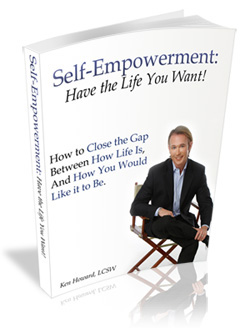 Ken Howard, LCSW, is licensed psychotherapist in California (Licensed Clinical Social Worker #LCS18290) and life/career/relationship coach who has specialized in therapy for gay men (individuals and gay male couples) and LGBT affirmative therapy for over 26 years. He helps many gay men (and others) resolve the issues that undermine your quality of life, and helps you to thrive.  He is openly gay and HIV-positive (28 years), and specializes in helping gay men overcome barriers, setbacks, and losses in life.